Dear Friends, show your support by switching of your lights at home between 8.30pm to 9.30pm in solidarity with Earth Hour.
Posted by TUNE TRAVEL at 12:02 AM No comments:

Check out these websites

Making a difference is easy.
Posted by TUNE TRAVEL at 10:28 AM No comments:

We don't have to believe that our house will burn down to take out insurance. So why delay taking action to reduce emissions? 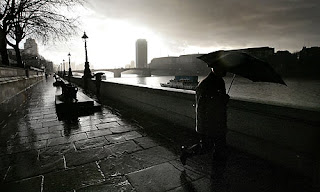 A man walks in the rain along the Albert Embankment in London. Photograph: Shaun Curry/AFP/Getty Images

Climate change is sometimes presented in simple black and white terms. You either believe it or you don't. Perhaps after the recent controversies over email leaks and melting Himalayan glaciers, some may have decided to change camp.

But this is a false dichotomy. Indeed the notion of "belief" plays no role at all in science, whether about climate change or anything else. The Royal Society, the UK's national academy of science, was founded 350 years ago on this very basis, with the motto Nullius in verba, or "take nobody's word for it". The founders took nothing for granted and chose to investigate observations and search for the conclusions that best fit them. The notion that these conclusions can never be considered certain and immutable, underpinned both their actions and those that came after them. As James Gleick wrote about the great 20th century theoretical physicist Richard Feynman; he believed in the primacy of doubt, not as a blemish on our ability to know, but as the essence of knowing.

Modern day weather prediction is inherently uncertain. Every day, weather forecast centres will generate an ensemble, typically of 50 individual weather predictions, in order to assess uncertainty in the weather up to a week or more ahead. The individual predictions have very slightly different starting conditions, reflecting the fact that the weather observations which generate a forecast's initial state are neither complete nor wholly accurate. When the atmosphere is in a predictable state, all 50 predictions are more or less identical for the coming week and the forecaster can say with great confidence what the weather will be like. On the other hand, when the atmosphere is in a chaotic state, the best the forecaster can talk about are probabilities of different outcomes.

Some, perhaps those without scientific training, may see probabilistic predictions as an evasion of responsibility. However, in reality, probabilistic predictions embody the scientific method. In any case, what is better for decision making, a forecast with some realistic measure of uncertainty, or some grossly overconfident prediction with no hint of uncertainty? Worldwide, probabilistic weather forecasts are now used by those making decisions to evacuate people exposed to river flooding, or to intense storms. For better or for worse, they are also central to who trade on future energy prices and other weather-sensitive commodities.

Similar "ensemble" methods are used to predict climate change, except here it is also critical to vary uncertain parameters in the climate models as well as uncertain estimates of how greenhouse gas emissions will change over the course of the century. As with the weather forecasts, contemporary climate predictions are essentially probabilistic. Hence for example, based on the ensemble of the world's climate models, we can estimate that over the Asian monsoon region, a season that was so wet it would only have a 1 in 20 chance of occurring in the 20th century, could have a 1 in 3 chance of occurring by the end of the 21st century.

We don't have to believe that our house will burn down in the coming year to take out insurance. Similarly we don't have to believe that dangerous climate change will occur to take action to cut emissions. A key question that everyone concerned by the climate change issue should ask, particularly those who are sceptical, is this. How large does the probability of serious climate change have to be before we should start cutting emissions? To be specific, how large does the probability have to be that by the end of this century, large parts of Bangladesh will under water because of sea level rise and a substantially more intense monsoon system? Or that the Amazonian rainforest will die because of shifts in rainfall patterns over South America? Or that the type of drought that plagued sub-Saharan Africa in the 1980s will become a quasi-permanent feature? 0.1%, 1%, 10%, 50%? Considered this way, it's clear that the dichotomy between the "climate believers" vs "climate sceptics" is indeed a false one.

The scientific method is sometimes described as "organised scepticism", and this, rather than some logical progression from one certainty to the next, characterises the inherently uncertain path of scientific progress. As one leading climate scientist put it: "In truth, we are all climate sceptics." However, despite the climate scientists' best efforts at scepticism, it simply has not been possible to rule out the risk of the sort of climate changes discussed above.

• Tim Palmer is a Royal Society 2010 Anniversary Research Professor at the Unversity of Oxford, and is organiser of a two-day discussion meeting at the Royal Society (22-23 March) on Handling Uncertainty in Science. The meeting includes speakers as diverse as Professor Sir Roger Penrose, eminent cosmologist and theoretical physicist, and Mervyn King, governor of the Bank of England.
Posted by TUNE TRAVEL at 12:49 AM No comments:

PUTRAJAYA: The Government has officially scrapped its plan to introduce the two-tiered restructuring of fuel subsidy following negative feedback from the public.

Domestic Trade, Co-operatives and Con­sumerism Minister Datuk Seri Ismail Sabri Yaakob said the decision was taken because the Government did not want such an important policy devoid of public support or acceptance.

“Prime Minister Datuk Seri Najib Tun Razak has stated that this is the people’s Government and it is open to views. Today, the Government has proven that we are not rhetoric and we truly hold on to our words.

“We have heard the people’s voices and now we have proven that we are willing to scrap the plan because the rakyat do not want it,” he told reporters here yesterday.

Ismail Sabri said the price of fuel would remain the same for now as “there was no directive to announce any hike”.

“I don’t know when that will happen but the public must remember that fuel price fluctuates.

“Foreigners can still purchase fuel according to petrol pump price. But the policy governing the sale of petrol to foreign-registered vehicles at border areas remains,” he said, adding that the ministry would be proposing to the Cabinet another “policy for foreigners”.

Foreign-registered vehicles are only allowed to pump a maximum of 20 litres at petrol stations within 50km radius from the border.

Ismail Sabri said the Government was subsidising nine sen more now in addition to the 30 sen it was already forking out for every litre of RON95 due to the commodity price increase.

Last year, the Government forked out RM3.4bil to subsidise petrol and RM1.9bil for diesel.

The plan, originally set to be implemented on May 1, was to introduce a two-tiered pricing system for petrol based on engine capacity while foreigners would have to pay the market price.

It called for the mandatory use of MyKad to differentiate Malaysians from foreigners, requiring the need for MyKad readers at petrol stations.

Ismail Sabri also said that a subsidy rationalisation laboratory headed by Minister in the Prime Minister’s Department Datuk Seri Idris Jala was studying the implementation of government subsidies.
Posted by TUNE TRAVEL at 10:12 PM No comments: