Though hydrogen fuel cells had existed since the early 1800’s, the General Motors Electrovan became the first hydrogen-fueled vehicle in 1966. And now, with federal funding for hydrogen-powered car research cut, neither GM nor Long Island is giving up on the possibility of a hydrogen-fueled future. 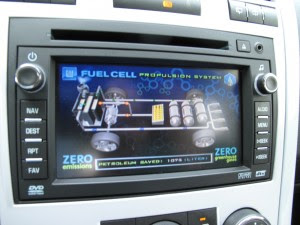 Monitor inside the Chevy Equinox

The Project Driveway Program is one more to add to a laundry list of “green” ideas, only this one could land you in the driver’s seat of a brand new car for two months. Here’s how it works. General Motors loans you an automobile which appears to be a regular, ordinary Chevy Equinox equipped with the usual gadgets and gizmos—AM/FM radio, OnStar Emergency help and a navigation system—however, this Equinox has been converted into a fuel cell. In a fuel cell vehicle, hydrogen combines with oxygen. The two are so attracted to each other they actually create electricity, and the only byproduct is water. GM is running this market test to spread awareness and interest and gain feedback from test drivers. Bari Wien, an intern at EmPower Solar Clean Energy Solutions in Island Park, is one of those drivers. “It seems as if people are fascinated by this new technology that is environmentally and politically beneficial,” says Wien. “What better way to satisfy intrigue and fascination than to drive it yourself?” For more details and to apply to be a test driver visit www.gongos.com. 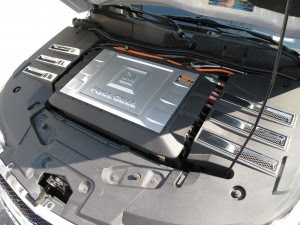 Under the Hood -- Hydrogen Fuel Cell

Vehicles running on hydrogen use no petroleum and have zero tailpipe emissions Clean steam is the only thing that comes out the back of the car. But certain obstacles have to be overcome before hydrogen cars hit the market on a large scale like: improving battery life, lowering the market price and tweaking the technology. Hydrogen is difficult to make and the process sometimes requires fossil fuels. Some stations rely on waste hydrogen products from factories, instead of fossil fuels. Right now, there is no electric car that can go farther than 200 miles and all batteries have a limited lifetime.

A pumping station in Point Lookout, scheduled to open in September at the Town of Hempstead’s Conservation and Waterways headquarters, will provide pure hydrogen, blended hydrogen compressed natural gas, as well as pure natural gas fuels for a variety of vehicles.
Hydrogen will be trucked in huge tubes to the station, then fed through pipes controlled by a computer. You attach the tube pipe to the vehicle just like you would during a regular gasoline fill-up. The only difference is you are injecting compressed air rather than a liquid. The station will be part of an engineered network of stations under New York State’s hydrogen roadmap. For more information visit www.toh.li.

—Danielle Valente
Posted by TUNE TRAVEL at 11:06 PM No comments:

He said government officers could make a positive difference by convincing the people through awareness programmes and campaigns that energy conservation could bring economic, social and environmental benefits to the public.

Dr Zainuddin was speaking to government officers and heads of departments from the various state and federal ministries during a talk, 'Sustainable Energy Management' organised by the Sarawak National Institute of Public Administration (Intan) here Wednesday.

He said it was anticipated that the world would see 200 million refugees by 2100, due to rising energy demand, widespread pollution and climate change.

Currently, Malaysia and Brunei are the only two Asean member countries that provided fuel subsidies, following the third global oil shock last year while tax incentives were given to companies to generate renewable energy under the Budget 2009, said Dr Zainuddin.

He said the country, which was moving towards renewable energy to gradually replace fossil fuel -- one of the biggest sources of greenhouse gas emissions -- currently only utilised 0.3 per cent as compared to 20 per cent in Germany as it still lacked the supporting structure from the commericalisation aspect.