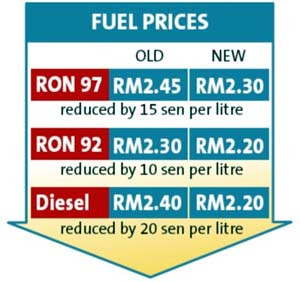 Administrative executive Theresa Heng, 49, said it was better than nothing.
Posted by TUNE TRAVEL at 11:22 AM No comments:

UNITED NATIONS (Reuters) - Instead of sidelining the fight against climate change, the global credit crisis could hasten countries' efforts to create "green growth" industries by revamping the financial system behind them, the U.N. climate chief said on Friday.

But that would depend on governments helping poor countries -- who are key to saving the planet's ecology -- tackle their problems, instead of spending most available money on rescuing the financial world, Yvo de Boer told reporters.

De Boer said the financial "earthquake" that has seen markets plunge worldwide in recent weeks could damage U.N.-led climate change talks, but only "if the opportunities that the crisis brings for climate change abatement are ignored."

"The credit crisis can be used to make progress in a new direction, an opportunity for global green economic growth," de Boer, who heads the Bonn-based U.N. Climate Change Secretariat, told a news conference.

"The credit crunch I believe is an opportunity to rebuild the financial system that would underpin sustainable growth ... Governments now have an opportunity to create and enforce policy which stimulates private competition to fund clean industry."

But he warned that "if available global capital is used primarily to refloat the financial world, we literally will sink the futures of the poorest of the poor.

"And I hope that the credit crunch will not mean that people in the South will have to wait for those in the North to have repaid their credit card debts and mortgages before attention is again turned to the South."

Without reaching out a hand to developing countries, it would be very difficult to make advances on the rest of the environmental agenda, De Boer said.

Environment ministers will meet in two months' time in Poznan, Poland, to prepare for the Copenhagen summit, which is due to agree on a new global-warming accord to succeed the Kyoto Protocol, which expires in 2012.

Ministers in Poznan must make clear they were "willing to put financial resources, the architecture, the institutions in place that will allow developing countries to engage in a global approach on both mitigation and adaptation," he said.

Funding did not have to all come from governments and he foresaw "an approach where we very much use the market".

De Boer said the financial crisis had not so far affected the Kyoto Protocol's Clean Development Mechanism, which allows rich countries to offset their carbon footprints by investing in clean energy projects in developing countries.

"I don't see a slowdown in the CDM pipeline at the moment," he said.
Posted by TUNE TRAVEL at 11:03 AM No comments:

Oil fell to its lowest level in eight months today, offering drivers and companies the hope of lower petrol prices in the weeks ahead.

The price of a barrel of US crude oil dropped to $89.38 in morning trading, a fall of $4. This followed sharp falls on world stockmarkets, reflecting concerns that demand for energy will drop as the global economy slows.

This is the first time since mid-February that a barrel of US crude has cost less than $90, and almost a year since it first broke through this level.

For most of 2008 oil has been well over $100 a barrel, causing pain at the pumps where petrol now costs well over £1 a litre.

A litre of unleaded petrol currently costs an average of 109.9p in the UK, with diesel costing 121.5p a litre, according to www.petrolprices.com.

Typically it costs around six weeks for changes in the oil price to feed through to the consumers, but there are already signs that prices are falling. On Friday Asda and Morrisons both cut their fuel prices, with a litre of unleaded now costing 105.9p at Asda, and 106.6p at Morrisons.

Merrill Lynch analysts predicted last that the price of oil could sink to $50 a barrel next year, if the economic slowdown deepens into a recession.

However, oil-producing cartel Opec may cut production to stem falling prices. Last month, as oil slipped below the symbolic $100 a barrel mark, it reversed earlier plans to boost output.

Graeme Wearden
Posted by TUNE TRAVEL at 5:55 PM No comments: